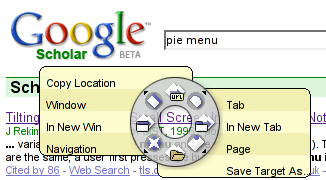 One of the main points in User Interface Design For Programmers or any other book on user interface design is that you should design interfaces based on user expectations. I agree with this for the most part, but it makes me sad. It makes me sad because it means that innovative interfaces are likely to fail even though they’re “better.” For example, there are plenty of studies that show that pie menus are superior to traditional linear menus, but they’ll never take the place of context menus. Why not? Because they’re too different from what people have come to expect when they right click.

So to make the most immediately usable product, all you can do is make incremental improvements. But to make a really innovative interface, we need to stop listening (literally) to users. We need to look past what the user says she or he wants and look to what goal the user is trying to actually accomplish. There is always a lot of risk in doing this because lots of people simply won’t get it. They won’t want to take the time to learn a new interface even if it will save more time in the long run and they’ll return to an interface that is familiar.

I see this happen a lot with Gmail. Walt Mossberg recently had an article in the Wall Street Journal comparing Yahoo mail (beta) to Gmail. He concluded that Yahoo mail was better because it more closely replicated the desktop experience (i.e., Outlook). He complains that Gmail doesn’t provide folders, which he has come to expect. It doesn’t matter that most people only have one level of folders [1] making them identical to labels. It breaks his expectations of how to organize email.

So when people say they want folders, what do they really want? In most cases, the goal is actually to find messages quickly; folders are used to aid in the search process. So when users say they want folders, what they really want is a fast way to find email. When I’m trying to find a message, I don’t really care how my email is organized, so long as I understand the structure and can quickly find my email. But labels (and search) provide this functionality, so why do users still complain about the lack of folders?

So what does that mean? It means that some people will love the new Yahoo mail and hate Gmail. But that’s ok, that’s just the physics of passion.

[1] In the current Yahoo mail, you can’t nest folders anyway making them identical to labels. Is this the case in Yahoo mail beta?

I really enjoyed this post. It gave me some interesting things to think about / discuss with my cow-orkers.

I think there’s an added problem here and that is that user tests can only get a person’s immediate reaction. It’s really hard to do a study where you find out how someone will work with software after they’ve had it long enough to get used to it. In fact, I think qualitative user tests are often totally flawed for just this reason (and I do such things all the time). It was interesting to do my own personal evaluation versus the other guy’s because I felt like he had used Gmail for testing purposes and not to the large degree necessary to really “get it”.

One other note is that it is really easy to introduce some error that won’t become apparent through user testing. So, I’m sure that they did testing on the “conversations” feature, but it was only after I had used it for over a year that I realized that sometimes I just miss emails if there is more than one new one in a conversation (I read the first one and think it was the only one because the others are scrolled off the page and/or below my reply box). How could they predict that? (And more importantly, how will they ever fix it?)

Of course, there’s always the “have both ways” way. I think mouse gestures in firefox is a good example of this one. Unfortunately, as you’re thinking, this won’t work for everything. Maybe what we really need to do is create a “funky” program (like an mp3 player or something) and introduce a lot of weird interface features into it - just to get people used to them for later products that we care about.

Nested folder need not be nested per say. Nested folders are most often used as a way of grouping things together so nested folder are used by the user to give him sence of perspective on the item/items within. Same thing goes for related fields on a form you group them to gether with a boundry so they know the context with out thinking to much.

Folder/Searches/Grouping needs to be obvious and should work for your mother without much explaining if you mother gets it it should be ok.

Maybe it really means that innovation needs to be managed. I think Gmail has shown itself to be incredibly successful despite Walt Mossberg.

I was just at a great design lecture by Brenda Laurel about design research. I wrote about my musings on my blog (www.synapticburn.com). But one great element she wrote was about cultural change and design. The goal of innovation is to inject new genetic material without a response from the immune system. If something is truly innovative in its wholistic design it will succeed in introducing said change w/o a contentious response from the targeted audience.

so I don’t think you should be all that sad. You (we) just need to find the means to be more wholistic to our approaches to design.

Also, don’t forget, Walt is ONE person. A reviewer, and is not a collective data point.

In the current Yahoo mail, you canâ€™t nest folders anyway making them identical to labels.

Slightly pedantic of me, but that’s not quite correct (unless Y! mail has changed a lot since I last looked at it)

One mail can have many labels, but it can’t be in many folders..

Ah, you’re right. I thought the ability to copy a message was in the menu, but I guess you can only move a message.

Some of my friends have made interesting comments after I’ve invited them into Gmail… “you can’t put anything in folders” and the like. It seems to me that people are just really lazy and need things explained to them. After a few minutes of chatting they see the benefits of keeping a single copy of an item (email) and using labels to organize. Do we need a gmail handholding introduction page? I mean there is this: http://mail.google.com/mail/help/why_gmail.html , but it doesn’t really explain why labels make so much sense.

Anyhow, on the pie-menu related field… after using Maya for a few years, I really can’t see why people aren’t moving toward the pie menu. A few weeks of using it and I became much quicker and I could actually create what I wanted to create rather than fighting a 10/20/30?-year-old menu structure. How old is File-Edit-Etc anyway?

I agree with Damon. I think introducing new menus and other innovations in programs people are likely to use for longer periods of time and not get frustrated with new ideas (i.e., not productivity software) might really help. I’m pretty sure my first experience with pie menus was in the Sims, and it was a revolution. (grin) I wish more of my software used pie menus. I guess the problem is that many users only use productivity software. So then what?