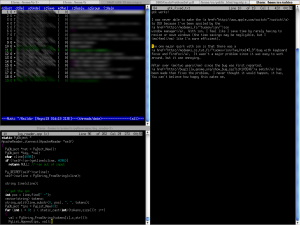 I was never able to make the switch to OSX because I’ve been spoiled by the ion window manager. With ion, I feel like I save time by rarely having to resize or move windows (the time savings may be negligible, but I feel like I’m more efficient).

The one major quirk with ion is that there was a bug with keyboard focus and Firefox. It wasn’t a major problem since it was easy to work around, but it was annoying.

After over two years since the bug was first reported, a patch has been made that fixes the problem. I never thought it would happen, but it has. You can’t believe how happy this makes me.

I resisted putting any serious study into scripting languages for quite some time, perhaps because when programming in a familiar language or taking some repetitive action (typing a common word or phrase), we’ve done it so many times that we can do it without thinking, so we ignore it when we temporally self-tabulate.

I suppose it’s not quite the same exact issue, but I have been thinking lately about developer inertia, wondering why I have resisted learning some things that I know would be useful and embraced other tools and techniques.

It’s not only statistical efficiency, then, that concerns developers.

I have this picture of my mind of a surface in R^3, with me on one side and some goal on the other, with a moderately imposing hill in between. When I brain.google the relative energy required, I know the total sum is less if I go straight over, but I might feel I’m making easier progress the other way.

I guess that’s just a local optimization strategy, but that phrase doesn’t quite capture the exact tradeoff, since even though it describes an explanation for how we chose technologies, I’m not sure it describes for me the act itself, the raptuous or hunky-clunky feeling of the tool or language in our hands.

I wonder how long your comments can be :)

My final thought won’t be my own:

Note: this is not a final thought, but a postscript, just as that previous sentence was an exclamation not a thought.

Maybe instead of picking languages we should pick language designers that we like and go from there. Since I’m guessing that matz and co do not scale logarithmically without undue shearing stress, I suggest we compose psychological profiles of such linguistic dictators, or, barring sophisticated study, copious sketchy quizzilla tests that classify us (that’s rascist!ally) as “Dutch”, “Dane”, “Jersey” or “Japanese”.

It’s hard to overcome the perceived notion of efficiency.

Prior to learning python, I had started writing some web apps in C++. Not because I needed the speed that the language provides, but because I though I could write code faster in C++.

Yeah, that’s a good quote. Anyway, I still need to try ruby and see what all the excitement over rails is. Maybe it will make me feel better than python.

I empathize completely. I love ion, I feel more productive, I kinda covet OS X, but I’d never switch, the firefox bug always annoyed me, and I too was overjoyed by the patch. For ion geeks, it’s a momentous occasion.

Now, the $64,000 question is…have you found a firefox/gtk build with this patch yet?

Heh, I run FreeBSD which uses a ports system so everything is compiled from source. It was easy to recompile gtk and I haven’t had any problems since. I don’t know of any pre-compiled binaries …